Getting a Handle on Christmas

Let me preface this post by admitting that I am a total nerd . . . and I like to gift-give and plan . . . and (just to reiterate) am a total nerd.
So there are only 88 days until Christmas! That may seem like a lot, but it will whizz by before you know it! And I only have four paychecks left before I'm done with the whole working full time thing (at least for now) so I want to make sure I have Christmas all sorted out.
You may remember me posting awhile back about wanting to win a gift code from CSN stores so I could get the kids this for Christmas: 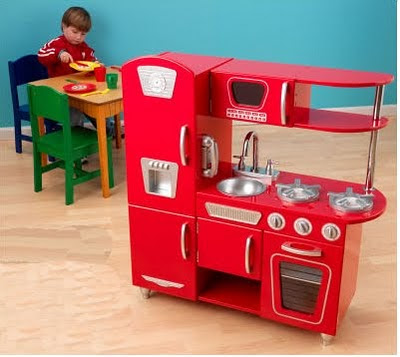 How awesome is this kitchen? They also had it in pink (oddly for like $40 less than the red which I guess is more popular), but as James is the one most fascinated by play kitchens I think we should stick with the uber hip retro red. I really, really wanted to get this kitchen, but it was $174, and I just could not justify spending that much. So I set out to win a CSN gift code giveaway. And I did! I thought if I could win at least $60 toward it I would be able to justify it in my own mind and I won $125 CSN gift code on Mommy I'm Hungry! $125! Which brings my grand total for this kitchen to $54! It is on it's way, via UPS, to Grammy's (whose garage I am using to stash all of my presents) at this very moment.
I also have a stocking stash in my desk at work, mostly little coloring books and stuff I have found in the $1 bin. It seems to be all Toy Story and Winnie the Pooh related - except for the Tinkerbelle socks.

So with the big present out of the way, I was able last week to work some amazing couponing and sales magic at Toys R Us. They were having a buy 2 get the 3rd free on several items, and I was able to use two $5 off of $25 coupons as well . . . here is the loot I got! 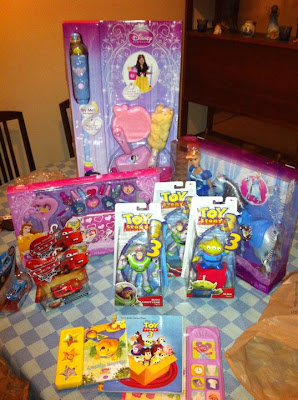 Three Disney princess items - the Cinderella is for Grammy to give to Maddie, the Snow White broom and cleaning set is actually for both Maddie and James, to compliment the kitchen - they had these sets at the princess house at the fair and both kids went ga-ga over them, the princess makeup set was my free item ($15.99) and Maddie will be thrilled as she loves applying makeup, especially lipstick which she calls "stickie."
The regular size Toy Story action figures were also buy 2 get 1, and while they were out of Woody and Jessie, I managed to snag the last two Buzz Lightyears in the store, one for each of the kids (Maddie is obssessed with Buzz Lightyear, obsessed is actually too mild a word) and got a free green alien to go with the Buzzes ($7.99).
The Cars toys are for the Jamie-miester and were $3.99 each, with the third being free, and the Winnie the Pooh and Toy Story books are for both kids, while the potty training book came home early. It makes all sorts of fun noises and the kids love it. I got the Winnie the Pooh book for free at ($4.99).
So, add this all up with my $10 off and I have a total savings of . . . wait for it . . . wait for it . . . math was never my strong suit. . . $42.96! And you can't be taxed on free (suck it Sacramento!), so that is another 4 bucks saved! Suh-weet. Let us pause for a moment as I congratulate myself.
Still pausing . . . still congratulating.
Ok. I am good.
So basically, I am almost done with Christmas for the two tiny people. There are several more things I am making for them, but the buying is pretty much done. And I am pretty much awesomesauce. Oh wait, I said I was done congratulating myself. Ahem.
How are you doing on Christmas? Have you started shopping yet? Started thinking about it yet? I will admit there is something also to be said for waiting until the last minute and striking like a ninja at 8 p.m. on Christmas eve. What are your thoughts?
Just for fun, here is a picture of James being attacked by a wild Tigger: