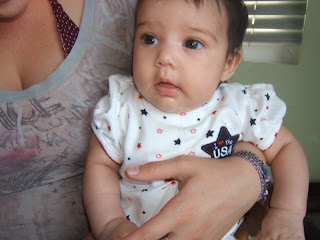 We celebrated Maddie's first Independence Day at the Beal's house. Steve made amazing ribs with bourbon maple bq sauce (so yummy), and we go to eat and hang out. After that we went to the drive in and saw Hancock. I gave it a 7 out of 10, Ed was a bit more harsh with a 5 out of 10 rating. The second feature was Don't Mess With the Zohan, and it was so bad we decided to just go home. We saw a few fireworks from our vantage point at the drive in, and a between films a few people toward the front of the theater set some off. Next 4th of July we will actually go to a show of some kind, or set off our own. A notice was sent out at our apartments saying we couldn't set any off, and that was disappointing.

The best part of the day though, was watching the six one hour episodes about the Revolution on the History channel.