I figured eventually that Maddie and James would be mistaken for twins, it is almost inevitable as they are only 14 months (and one day!) apart.  James is also a super big baby, not that Maddie is a tiny little thing by any stretch of the imagination, but James takes it to a whole new level.  I figured eventually James would catch up to, and even pass, Maddie in size and we'd start getting the are they twins question then.  I never thought people would start asking when he was only 7 months old.  I mean, he's big, but he's not as big as an almost 2 year old!  We have gotten the question twice in two days though, so there must be something I am not seeing. . . . both times they've been bundled up in the stroller, so maybe seated they look closer in size.
Here are the "twins" on their way to the library: 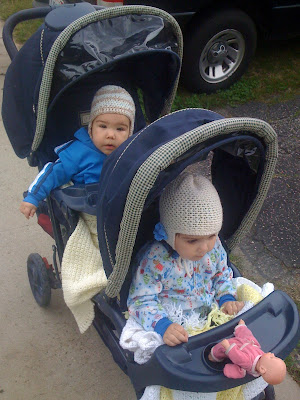 Let's just take a minute and contemplate how totally insane it is that I even have two babies this close in age.  I mean, it is still a little odd to me that I have one baby . . . after six years of trying, two losses, it took 3 injectable iuis and 2 ivf cycles to have my sweet Maddie, and then boom 5 months later I am pregnant with James.  I never thought I'd be that story, you know the annoying one everyone tells to their infertile friends - "Oh, I know this girl who did ivf and then got pregnant again right after . . ."  Omg I am THAT story.
A fun little trip down memory lane . . .  look at all the drugs I got to shoot up with for one cycle of ivf (yes I said one!) 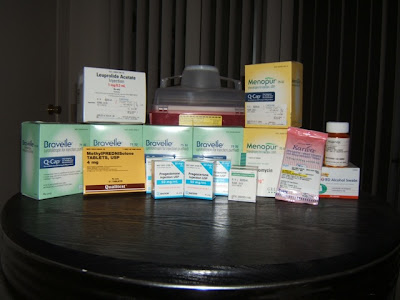 Boy, am I happy I am that story - annoying as I found them when I was doing infertility treatments.
Posted by Jessica at 9:19 AM